"Physical therapy is not a subspecialty of the medical profession and physical therapists are not medical doctors; we are a separate profession that provides a unique service that physicians are unable and untrained to provide."

Why should you care?

Commercial health care costs are going up - does it matter whether price or patient volume is to blame?

Some voices in the Town Hall argued that Copayment reform legislation in Florida is not necessary since rising physical therapy utilization indicates there are no barriers to patient access to physical therapists. 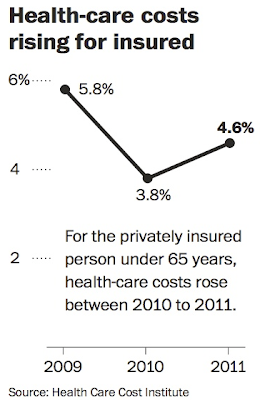 Increasing health care costs, to employers via premiums and to employees in the form of rising Copayments, reduce access to physical therapist services.

Do we want to live in an America where only the rich or the employed have access to physical therapist services?

The prices paid were the primary drivers of health care spending in 2011.


"Employers typically have tried to control costs by reducing the volume of care delivered, whether that means higher co-pays for doctor visits or using prevention to catch costly diseases earlier."

Copayment reform for physical therapy patients was a "slam dunk" in Kentucky, South Dakota and New Jersey in 2011 and 2012.

Other state physical therapy associations have not seen the same rapid success with Copayment reform. There is not even uniform agreement that Copayment reform is necessary for patients. Florida is one example where there is disagreement.

Some other opponents of Copayment reform at the recent Town Hall meeting in Daytona Beach spoke out and suggested that insurance companies would "get mad" at the FPTA if we, as an organization, supported Copayment reform.

Do physical therapists and students feel so much anxiety over health care reform that they prefer to vote for short-run self-interests over long-run investments?

Outcomes measurement linked to physical therapist reimbursement was the subject of the 2012 Oxford Debate at the Florida Physical Therapy Association Meeting (FPTA) in Daytona Beach. The students and physical therapists in the room - about 400 - mainly voted against using these measures for payment.

I question if students, in these changing times, are prepared to put the interests of their patients and their profession ahead of their own interests. I can't really blame them. I was a student once, too. The future is uncertain and scary.

This student-led decision was reminiscent of the American Physical Therapy Association's (APTA) 2011 Annual Conference in Washington DC when a student-dominated audience voted against Clinical Decision Rules.

Oxford Debates pit two teams arguing contrary positions. Each team "wins" by persuading the audience to cheer, make noise or physically move from one side of the room to the other. The side with the most supporters wins the debate. Most Oxford Debates handle serious topics in a fun environment. Drinks are usually served.

This convention was well-attended by students, many of them from the University of St. Augustine. The student-dominated audience split about 60/40 against using patient outcomes to reward physical therapists.

Inadequate risk adjustment seemed to be the main reason outcome measures should not be used, according to the speakers and the audience. In other words, the measure would ONLY capture the outcome of care which might depend on factors other than the therapists' effort and skill.

We've recently heard similar arguments in the Chicago teachers' strike when school teachers objected to being paid based on the standardized test scores (outcomes) of their students. The teachers argued that many factors that affect test scores are beyond their control. Paying teachers based on test scores was unfair since many of the determinants of teacher performance happened outside of the classroom.

A physical therapy student at the Oxford Debate noted that the most important determinants of health also occur outside the physical therapy clinic. These determinants are things like the following:
Young people are typically more tolerant of risk, according to standard economic thought. They have more years to make up any financial loss so they're supposed to be more willing to accept risk.

However, I think these students' behavior is rational.

Instead of pushing physical therapists and students to accept a reimbursement system that puts us at risk let's design a system that lets us think about patient care rather than worry about money.

What do you think?

Older adults falling down at home and elsewhere is a growing problem in the United States. About 30% of older people fall in a year.

An update of a 2009 Cochrane Review of the effectiveness of a falls reduction programs found that exercise and home safety interventions prevent falls in older adults.

Among the other interventions that helped reduce the rate of falls or risk for falls:


Some of the interventions that did not have an effect include:

Finally, to prevent a Medicare Audit a physical therapist can document routine blood pressure measure before, during and after exercise can show Skilled Physical Therapy.

"Skilled Physical Therapy" means that your service normally wouldn't be provided by a lesser trained provider, such as a massage therapist or athletic trainer.

Physical therapists work on medically complex patients where safety is a key concern. We know that 7% to 12% of individuals experience an adverse response to exercise. Adverse response is defined as:


"...an exercise-induced change that worsens a risk factor (such as BP) beyond measurement error and expected day-to-day variation."

Physicians probably cannot detect these individuals reliably. Physical therapists could measure blood pressure changes during and after and on multiple sessions of exercise. Adverse changes could provide the physical therapist with cues that could indicate a change in the Plan of Care or referral.
Posted by Unknown at 1:39 PM
Taking Routine Blood Pressures in the Physical Therapy Clinic
2012-09-06T13:39:00-04:00
Unknown
ACCOUNTABLE CARE ORGANIZATIONS|aco|blood pressure|hypertension|Medicare audit|physical therapy|primary care providers|skilled physical therapy|
Comments

Get free stuff at BulletproofPT.com

Bulletproof Expert Systems: Clinical Decision Support for Physical Therapists in the Outpatient Setting is a manager's workbook with stories, checklists, charts, graphs, tables, and templates describing how you can use paper-based or computerized tools to improve your clinic's Medicare compliance, process adherence and patient outcomes.

Tim has implemented a computerized Clinical Decision Support (CDS) system in his clinic since 2006 that serves as a Reminder, Alerting, Prompting and Predicting CDS using evidence-based tests and measures.

Tim can be reached at
TimRichPT@BulletproofPT.com .

Copyright 2007-2010 by Tim Richardson, PT.
No reproduction without authorization.

Helpful Blogs That I Read